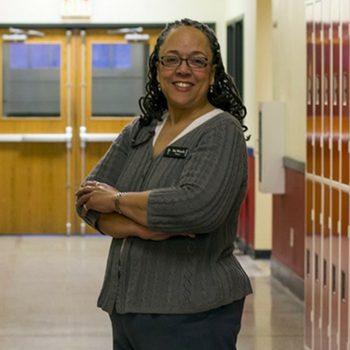 Dorwatha was born in Frankfurt, Germany in 1958, the 6th daughter of Ltc. and Mrs. Louis M. Woods.  She received a global world view being an Army brat with a family that relocated every 18 months.  She attended Hampton Institute for her BS degree in Elementary Education with a minor in Early Childhood Education.  She continued her education at University of Michigan for her MA degree in Special Education: Learning Disabilities and Emotional Impairment.  In 2012 she completed a 2-year Spanish Language and Cultural study at the University of St. Thomas in St. Paul, MN. in the Murray Institute.

Dorwatha Woods just completed a 29 – year career as the Principal of Ascension Catholic School on June 30, 2016.  She had a positive vision for inner city scholars on the north side of Minneapolis to academically achieve at high levels. Under her tenacious leadership, her vision was realized largely through significant school partnerships such as the Northside Achievement Zone, MacPhail Center for Music, and the Flaherty Family Foundation, many corporate partners and individuals.

After spending a year caring for a new grandchild and working part-time for Creighton University mentoring MA level candidates in their MAGIS program and helping facilitate the interview process for the Flaherty Family Foundation, she is now employed full time as a Scholarship Facilitator for the Flaherty Family Foundation. It is work that resonates with who she is and how she has spent her life’s focus.

She was awarded the 2014 WEM Outstanding Educator Award from the WEM Foundation and Synergy & Leadership Exchange in “recognition of superior contributions of educators whose leadership and dedication inspire a spirit of learning in students of all backgrounds and abilities outside the traditional education system and classroom”.   She received the 2013 Duet Award from MacPhail Center for Music for her exemplary leadership in forming the first school partnership with MacPhail Center for Music 25 years ago, which has been the model used by MacPhail in forming over 80 additional school partnerships. Other honors include the WCCO Excellent Educator Award in 2016, the Inspiring Women Award in 2014 from the MN Lynx Basketball Team and Land O’Lakes, Inc., the Excellence in Catechesis Leadership Award in 2003 from the Archdiocese of Minneapolis and St. Paul, the Mahala S. Evans Award – Outstanding Soror in 2009 from the Gamma Tau Chapter of Iota Phi Lambda Sorority, Inc., and the 23rd Annual Archbishop John Ireland Award in 1991 “For those who distinguish themselves in promoting better human relations based on justice.”

Ms. Woods served 6 years as the President of the Gamma Tau Chapter of Iota Phi Lambda Sorority, Inc. – a black business women’s sorority that targets women’s issues and gains scholarship dollars for women and girls to attend college.  She is instrumental in making sure that women and girls have a fair advantage in the fields of business and science.

Ms. Dorwatha Woods has volunteered her time as a cook for the Clare Housing Organization, cooking monthly for clients in residential care that battle the effects of AIDS. She also was Volunteer of the Year at Value Village where she volunteered each Saturday for 3 years.  She is a mother of 2 grown daughters and two grandbabies. She is an avid cook, swimmer, and gardener.