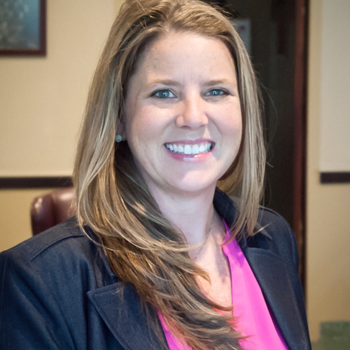 Beth was thrilled to join the Flaherty Family Foundation (FFF) as the first executive director in September of 2015. The Flaherty Family Foundation provides high school college prep scholarships to high potential students with economic need. Flaherty has expanded and formalized the Scholarship Opportunity from 11 Flaherty Scholars at three high schools in the Twin Cities to over 280 Flaherty Scholars at 32 high schools in Minnesota, Virginia, Washington, D.C., Maryland, New Jersey and Montana.

After student-teaching at Highland Park Senior High School in the fall of 1999, Flaherty moved to Breckenridge, Colorado and taught ski school to preschoolers.  Her first year in the classroom was split between Minnesota Business Academy, a charter high school in St. Paul, and co-teaching third grade at Ascension Catholic School in Minneapolis.  She spent the next eight years teaching middle and high school social studies and coaching gymnastics in Summit County, Colorado. While in Summit Country she was a mentor with Mountain Mentors, received the Asset Builder of the Month award from Summit Prevention Alliance and earned recognition as the Jefferson County Coach of the year in 2008. She spent six years of teaching in Arlington, Virginia at Washington-Lee High School and an alternative school, New Directions, which serves students involved in the juvenile justice system. In addition, Flaherty has been a foster parent in Arlington County since 2010 and recently began mentoring with Capital Partners for Education in Washington, D.C.

Flaherty earned her BA in Social Studies from Hamline University in St. Paul, Minnesota. While at Hamline, Flaherty was a two-time captain of the gymnastics team, a four-time All-American, and National Champion on Floor Exercise.  She was inducted into the Hamline University Athletic Hall of Fame in 2013. Flaherty received an MA in Educational Leadership in 2006 and an MA in Curriculum and Instruction in 2010 from Adams State University in Alamosa, Colorado. Flaherty currently resides in Arlington, Virginia.